ERYKAH BADU COMES TO DAILY’S PLACE THIS MAY

Tickets On Sale Starting Friday, January 21 at 10am ET at ticketmaster.com.

JACKSONVILLE, Fla. – Bold Events announced today that GRAMMY winning singer-songwriter, Erykah Badu, will be coming to Daily’s Place on Friday, May 6 at 8:00 p.m. ET with special guest Goodie Mob. Tickets will go on sale to the general public at dailysplace.com beginning Friday, January 21 at 10 a.m. ET. Jags365 and Daily’s Rewards members will have access to presale tickets between Tuesday, January 19 at 10 a.m. through Wednesday, January 20 at 10 p.m. ET. For complete ticket information, including all presales and ticket prices, please click here.

Since she burst on the scene in 1997, the Dallas based (and Texas proud) Badu has released 5 studio albums, countless singles and EPs, and has toured the world many times over. Since her debut Baduizm went multi-platinum, winning her two Grammys for Best Female R&B Vocal Performance and Best R&B Album, all of Erykah’s studio albums have debuted within the Top 15 of the Billboard Album Charts, with 4 of them debuting within the top 4. She has released 10 Top 10 singles on the Billboard Adult R&B Songs chart, including 3 #1s.  In 2000 she won another Grammy (Rap Performance by a Duo or Group) for in 2003 she was awarded the Grammy for Best R&B single for her song “Love Of My Life (An Ode to Hip Hop).” Badu’s artistic and spiritual contributions to humanity earned her an honorary Doctorate degree in Humanities from Paul Quinn College in 2000. 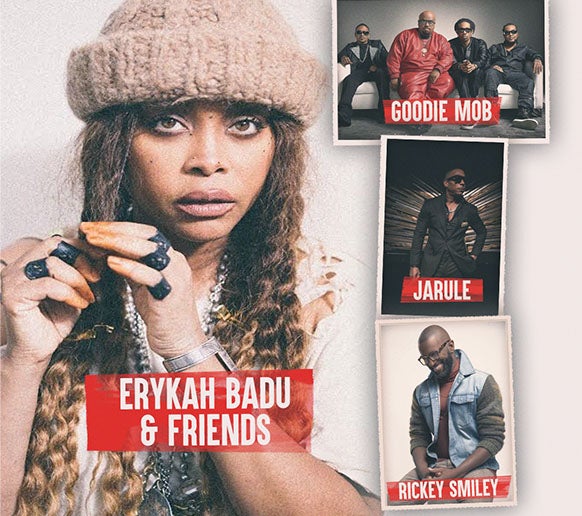