TOUR KICKS OFF MAY 17 IN JACKSONVILLE, FL

JACKSONVILLE, Fla. – The Lumineers and Bold Events announced today that due to overwhelming demand, a second Jacksonville date has been added to The Lumineers Brightside World Tour. In addition to the original May 18, 2022 stop, The Lumineers will now kick off the entire tour an extra day early at Daily’s Place on May 17, 2022. Tickets for the new show will go on sale to the general public at www.dailysplace.com beginning Friday, March 11 at 10 a.m. Jaguars Season Ticket and Daily’s Rewards Members will have access to presale tickets on Thursday, March 10 between 10 a.m. and 10 p.m.

After successfully creating the world’s first major climate positive tour in 2020, The Lumineers are proud to continue their partnership with environmental non-profit REVERB.org, on this year’s tour. The band has committed to a comprehensive climate action program via REVERB’s Music Climate Revolution campaign, which, in addition to reducing the tour’s environmental footprint and engaging fans to take action at the shows, will support projects that directly and measurably eliminate greenhouse gases while benefitting diverse global communities. These efforts will make the tour climate positive; eliminating significantly more greenhouse gas pollution than the tour emits including fan travel to and from shows.

The BRIGHTSIDE World Tour celebrates the recent arrival of the Lumineers’ eagerly anticipated new album, BRIGHTSIDE, available now via Dualtone in the U.S. & Canada and Decca Records for the rest of the world. The 2x GRAMMY® Award-nominated band’s fourth studio album, BRIGHTSIDE includes such  new favorites as “A.M. RADIO,” “BIG SHOT,” “WHERE WE ARE,”and the chart-topping first single and title track, “BRIGHTSIDE,” all joined by official music videos streaming now at YouTube. “BRIGHTSIDE” recently made history by ascending to #1 on Billboard’s “Alternative National Airplay” and “Adult Alternative Airplay” charts – the band’s sixth time atop the latter ranking in less than 10 years. The Lumineers now boast the most #1 singles among all acts on that chart in the span since achieving their first AAA chart-topper in 2012. 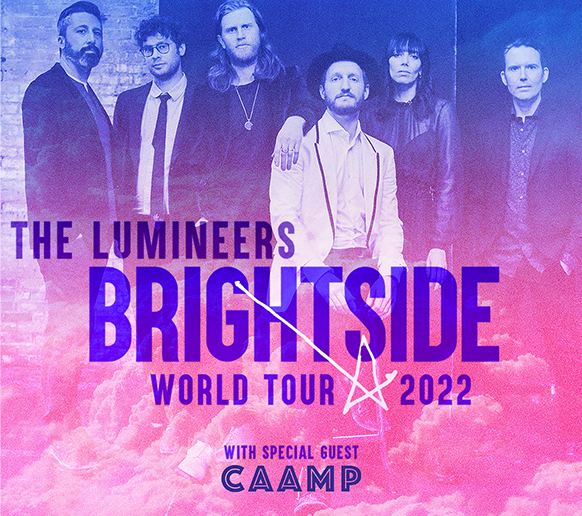