ZAC BROWN BAND ANNOUNCES 2022 INTERNATIONAL “OUT IN THE MIDDLE TOUR

Tickets for October 7th at Daily’s Place go on sale Friday, January 21st at 10AM EST at ticketmaster.com.

JACKSONVILLE, Fla. – Today, multi-platinum, GRAMMY Award-winning Zac Brown Band announced their upcoming 2022 international tour, “Out in the Middle Tour.” The new set of dates, produced by Live Nation, follows 2021’s incredibly successful “The Comeback Tour,” where the band staged their comeback to live performances following a COVID-19 hiatus. The “Out in the Middle Tour” will see the band return to Daily’s Place on Friday, October 7th at 7:00 p.m. ET with special guest Robert Randolph Band.

“Performing in front of millions of fans around the world is one of the most electrifying and humbling feelings,” said Brown. “We’re so excited to go back out on the road and keep the unbelievable momentum going from ‘The Comeback Tour.’ It’s been such an incredible year for the band, debuting some of the best music we’ve ever made, and we are thrilled to continue playing live for our amazing fans.”

Zac Brown Band is one of the most successful and consistent touring acts of the last decade and regularly claims a top spot in Pollstar’s Top 10 Global Concert Tour list. The Boston Globe praised the band’s live show saying, “[Zac Brown Band’s] blend of chops, spirit, and knowing exactly how to please a crowd has made them one of the summer concert season’s most reliable draws, always ready for a good time but also keenly aware of how to keep an audience on its toes.”

Tickets will go on sale to the general public at dailysplace.com beginning Friday, January 21 at 10 a.m. ET. Jags365 and Daily’s Rewards members will have access to presale tickets Thursday, January 20 between 10 a.m. and 10 p.m. ET. Citi is the official card of Zac Brown Band’s tour. Citi cardmembers will have access to presale tickets beginning Tuesday, January 18 at 12 p.m. ET until Thursday, January 20 at 10 p.m. ET through the Citi Entertainment program. For complete presale details visit www.citientertainment.com. Zac Brown Band will offer VIP packages for each show that include premium tickets, access to the Uncaged Lounge with complimentary wine, beer & appetizers, an exclusive VIP gift item & more! Package contents vary based on offer selected. Fans can visit www.VIPNation.com for more information! The “Zamily” Fan Club Pre-Sale will begin on Tuesday, January 18 at 10 a.m. ET followed by the simultaneous Spotify and Live Nation Pre-Sales on Wednesday, January 19  at 10 a.m. ET. 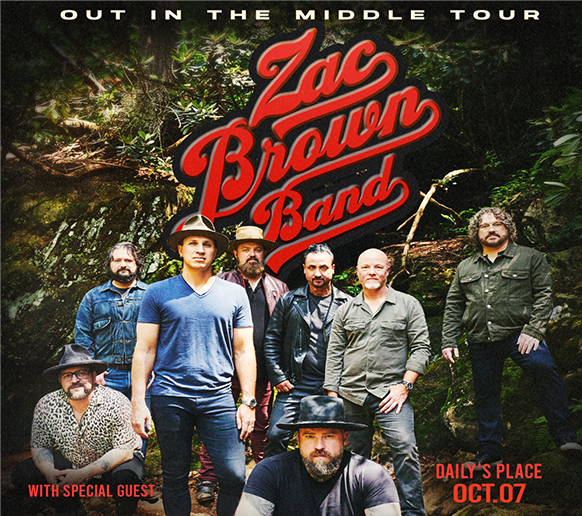 Zac Brown Band: Out in the Middle Tour